Carpool from Tucson leaves  at 5 pm. Ina and Oracle. In front of Bank of America. Look for a red Prius. 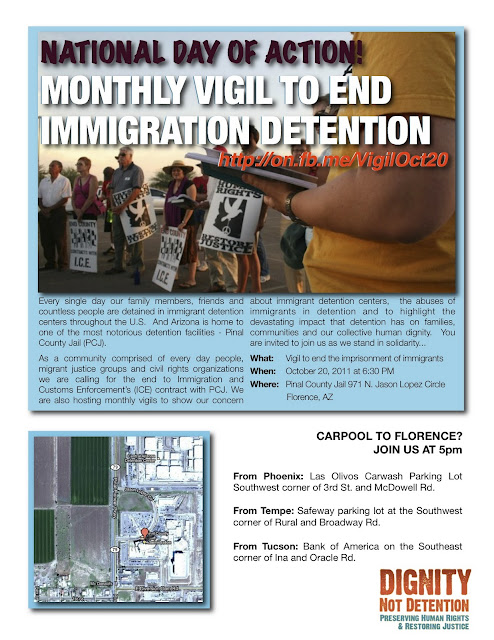 You really can make a difference. And it’s not that hard. Write a letter. Send a card. Go listen to someone who is in immigration detention. It’s like prison there for them. It’s not supposed to be. But it is prison. And it is full of disregard of people’s humanity, dignity, and international human rights.

Learn more about our national immigration detention system, what it is like for the more than 3,000 people who are detained in Florence and Eloy, Arizona, why they are detained, and how you can write, visit, and offer hospitality to the men and women there.

Staff from the Florence Immigrant and Refugee Rights Project and members of the Restoration Project at Casa Mariposa will offer trainings in Phoenix and Tucson soon.

Attending the training is the first step to participating in the writing, visitation, and hospitality program that is facilitated by the Restoration Project and the Florence Project. We try to offer these about once every other month in both cities. Bring snacks to share as we learn together and build a strong network of support and solidarity with those inside and outside of immigration detention centers in Arizona.

What is smuggling? What is human trafficking? How to recognize if someone is being trafficked and how to best help.

This training is open to all. And is free.


Help spread the word on Facebook. Here's the event page.

Posted by Restoration Project Florence at 7:29 PM No comments:

TUCSON, Ariz. - The mistreatment of thousands of immigrants in Arizona detention centers will be discussed Tuesday evening at a community forum in Tucson. A two-year study by ACLU Arizona documents inhumane conditions, abuse and a lack of adequate legal protection for some 3,000 detained immigrants.


Ten percent of the country's detained immigrant population is being held in Arizona. Many of the detainees have been held for months - or even years - while appealing their legal status.

ACLU Arizona staff attorney Victoria Lopez says some of the worst abuses were found at the Pinal County Jail, where U.S. Immigration and Customs Enforcement (ICE) contracts for bed space.

"They noted verbal and mental abuse by guards. They noted a lack of ability for detainees to have contact visits with their family members. They noted detainees not having the opportunity to have outdoor recreation."

ICE officials say conditions at the Pinal County Jail meet or exceed federal detention standards. However, Lopez says, no one but ICE monitors conditions, the standards vary from facility to facility and they are not legally enforceable.

The ACLU report findings demonstrate the need for immediate reform of the immigration detention system, Lopez says. She suggests that a good first step would be for the federal government to terminate a costly contract that pays the Pinal County Jail an estimated $13 million a year to house immigrants.

"Detention costs are much, much higher than some alternatives to detention, which can cost as little as $12 dollars per day. At the Pinal County Jail, for example, the federal government contracts $59 dollars per day, per detainee."

Lopez adds there's a major misperception among the public about who is being held in Arizona's federal detention centers. She says they detainees are not necessarily "illegal" immigrants.

"Many of those being held are people who have legal permanent resident status and, in fact, may have an opportunity under the current U.S. immigration laws to fix their immigration status or remain legally in the United States."

The report is available for download at http://www.acluaz.org/detention-report-2011.
Posted by Restoration Project Florence at 3:21 PM No comments:

August 20, Tucson: Special Training on Human Trafficking.
Learn the difference between smuggling and trafficking. How to recognize it. And what to do.
Led by ALERT: Arizona League to End Regional Trafficking.
10 am — 12:30 pm
St Andrew’s Episcopal Church Parish Hall
545 South 5th Avenue, Tucson
This training is open to all.
Contact us with questions.

August 27, Phoenix orientation
Learn about the immigration detention system. Get involved in the Restoration Project network of solidarity and support. Be part of starting the Phoenix Greyhound hospitality network.
10 am — 12:30 pm. Contact us for location.

September 17, Tucson orientation
Learn about the immigration detention system and how you can get involved in the Restoration Project network of solidarity and support by writing, visiting men and women detained, hosting asylum seekers and others just out of detention in your home, and being present at the Tucson Greyhound station to greet men and women just released from the Eloy detention center.
10 am — 12:30 pm.
Casa Mariposa, 340 S. 3rd Ave., Tucson


All events are free. Bring snacks to share.
Posted by Restoration Project Florence at 11:44 AM No comments:

Photos from Dignity not Detention Vigil 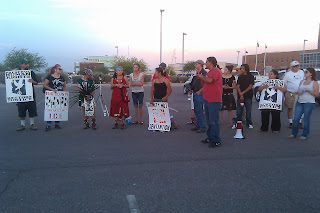 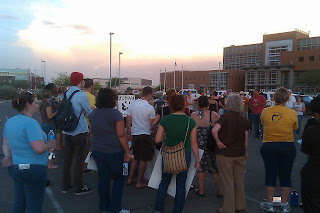 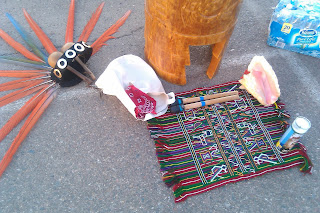 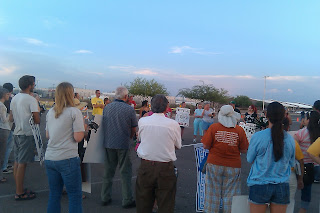 More than 70 people from across Arizona gathered to call for an end to the ICE contract with Pinal County Jail. Monthly vigils will continue until action is taken. Next vigil: August 11.

This first gathering was a beautiful, organic, peaceful, grassroots beginning. Poetry, personal testimony by two men who had been detained, ways to get involved, Aztec dances, singing, were all part of the vigil.
Posted by Restoration Project Florence at 11:36 AM No comments:

MEDIA ADVISORY
For Immediate Release:
Thursday, July 07, 2011
Contact:
Alessandra Soler Meetze, ACLU of Arizona at 602-418-5499 (cell)/602-773-6006 (office)
COMMUNITY VIGIL CALLS FOR “DIGNITY NOT DETENTION”
Advocates Call for an End to Detention Contracts between
Pinal County Jail and ICE
PHOENIX— A coalition of immigrants’ rights groups, civil rights organizations and community members from across the state will hold a vigil at 6:30 p.m. on Thursday, July 7th at the Pinal County Jail (PCJ) in Florence to highlight abuses of immigrant detainees and call for an end to the detention contract between PCJ and Immigration and Customs Enforcement (ICE).
According to a report recently released by the ACLU of Arizona, detainees at PCJ face conditions that jeopardize their safety and well-being including inadequate medical care, no contact visits with family, no outdoor recreation and verbal and mental abuse by jail personnel. Pinal County Jail is one of five detention centers contracted by ICE to detain 3,000 immigrant detainees on any given day in Eloy and Florence, Arizona.
Advocates are calling on ICE to terminate its contract with Pinal County Jail, which according to news reports makes about $36,000 a night – or $13 million a year – off its contract with the federal government to house immigrants.
WHAT:                        Vigil outside of Pinal County Jail in support of immigrant detainees
Find the vigil event page on Facebook
WHEN:            6:30 p.m. Thursday, July 7, 2011
WHERE:            In the parking lot of the Pinal County Superior Court (in the same plaza as the jail) at 971 N. Jason Lopez Circle in Florence, Arizona
WHO:            The vigil is being organized by The Puente Movement, ACLU of Arizona, No More Deaths, The Restoration Project at Casa Mariposa, Corazón de Tucson, The Black Alliance for Just Immigration and other organizations and individuals
WHY:             To support all of the people inside immigration detention centers and to bring awareness about misguided immigration detention policies that have led to the dramatic increase in the number of detained immigrants who are subjected to inhumane conditions and injustices perpetuated by county contracts with ICE.

Posted by Restoration Project Florence at 12:57 PM No comments:

Through facilitating human connection we seek to liberate the gifts and capacities of those being held captive both inside and outside of immigration detention facilities, so that we might work together to transform our world.